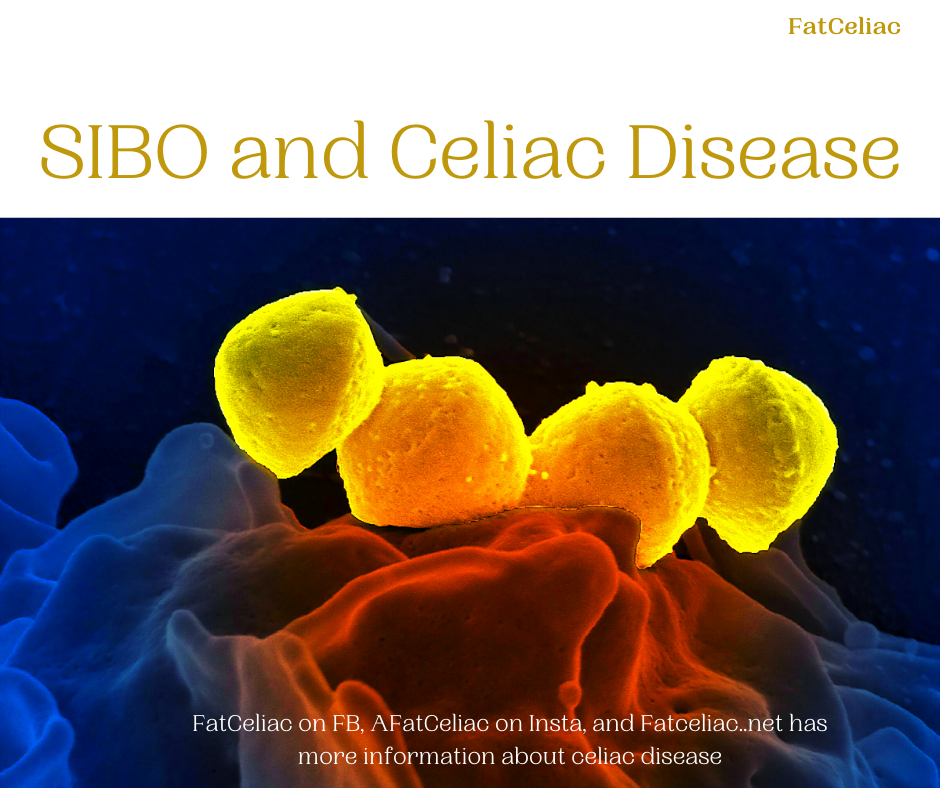 Small Intestinal Bacteria Overgrowth or SIBO is a common issue for those with and without celiac disease. What is SIBO and what does the science say about SIBO and celiac disease? Let’s look!

The abnormally functioning digestive system provides a breeding ground for excessive bacteria. Food digests more slowly in SIBO patients. The slower processing gives the bacteria a breeding ground and the ability to rapidly grow and expand. Once the overgrowth of bacteria has taken root, often it creates more digestive issues, like bloating and diarrhea among others.

In the scientific literature there is not much about celiac and SIBO, except a small 2003 study of treated celiac patients with ongoing symptoms. They looked at 15 celiac patients 6-8 months after implementing a gluten free diet with ongoing symptoms. All of the patients showed improved intestinal biopsies. Refractory celiac could be eliminated as a cause of concern. Ten of the fifteen showed SIBO. After antibiotic treatment, the SIBO and symptoms had cleared. This study demonstrates that SIBO could be the root cause of ongoing celiac symptoms.

There is another study where they took two groups of treated celiac patients with ongoing celiac symptoms. They took SIBO tests on day 0, day 2, and day 12. They divided the participants into two groups. One group was given rifaximin and the other group was given placebo. The treatment lasted for 10 days. They found no difference in the breath tests between the groups that took the rifaximin and the group that took the placebo. Specifically, the conclusion to the study says, “Rifaximin does not improve patients’ reporting of gastrointestinal symptoms and hydrogen breath tests do not reliably identify who will respond to antibiotic therapy.”

Currently, the science isn’t clear. They don’t know whether ongoing celiac symptoms can be attributed to SIBO. Or if the SIBO is treated, that the ongoing symptoms will resolve.. We just have to try it to see if it works for you.

A breath test will evaluate excess methane and hydrogen produced by the excess bacteria. The tests, though, are unreliable. They only have a 44% to 62% accuracy rating. So, the testing for SIBO isn’t really great either.

SIBO is a fairly new discovery. SIBO was discovered in 2004. I think we don’t know a lot about how it happens or how it affects celiac disease. Was the SIBO the cause of the celiac or was the celiac what caused the SIBO? The scientists don’t know. The research is conflicting.

There might be more on tomorrow with leaky gut, SIBO, and celiac depending on what I can find.

One thought on “SIBO and Celiac”