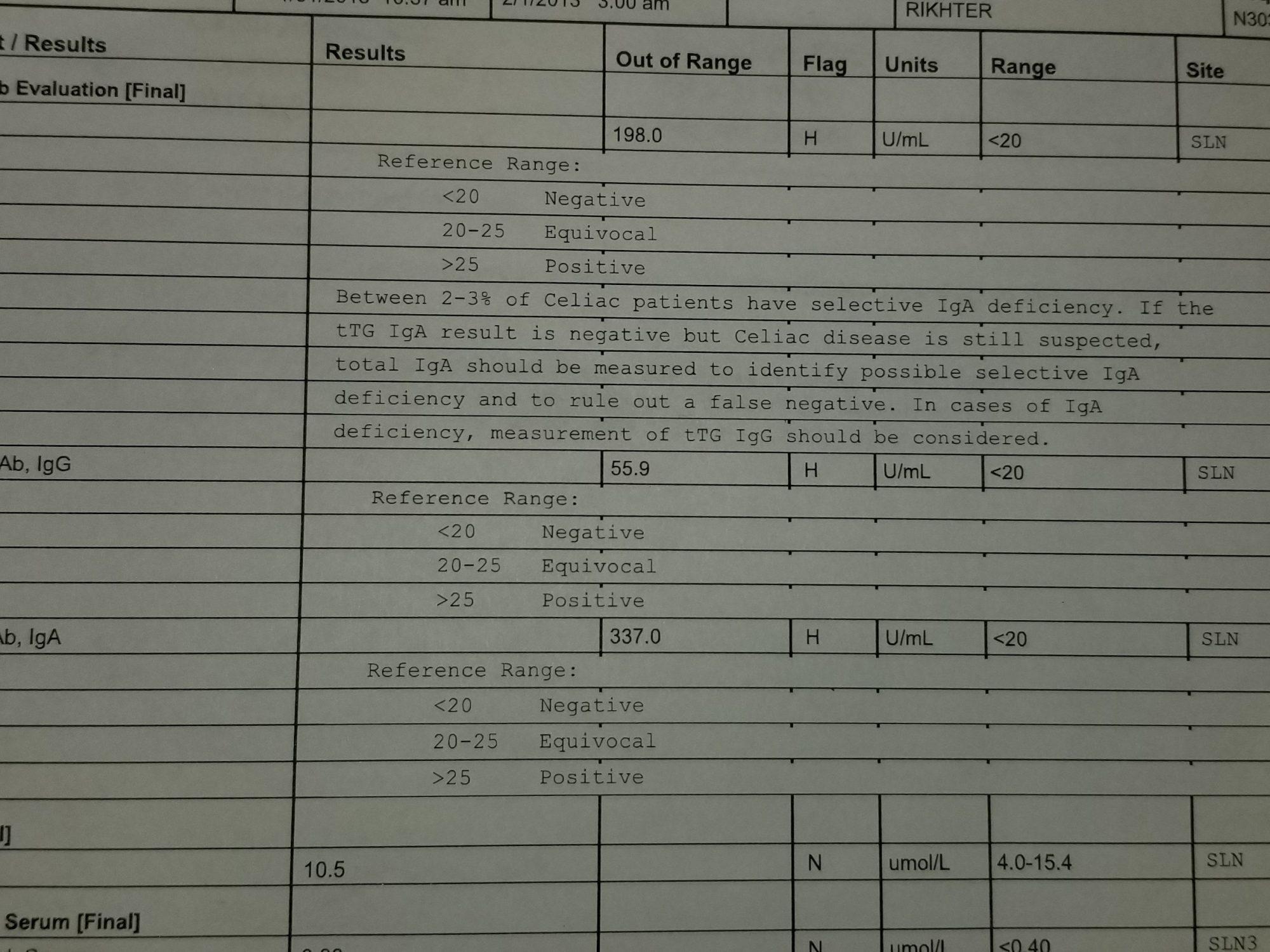 When these tests were run in 2013, they took a week for me to get the results and they were the only tests available. When I got the results, I was told I had celiac sprue, start a gluten free diet, and it was my choice if I wanted to see a gastroenterologist. That was it, but how did I get to the point where I wanted him to run tests.

I had two kids under 5 and was a stay at home mom. I was feeling run down and lethargic. I couldn’t keep up with the kids. So, I went to the doctor and said that something was wrong with me. I said we needed to figure it out. He said that yes at my age I should not feel that run down. So, we ran some blood tests.

While I was waiting for those results, I starting asking my husband some questions about his health. I know my husband doesn’t sleep, but I sleep like a rock. He eats a little more healthily than I do, but is a big fan of a late night PB&J.

Then I asked when the last time he had diarrhea was – his answer shocked me, he said that he couldn’t remember. Now at this point, I was having bouts of diarrhea 6-7 times a day. It came on so gradually, I never even thought about it being a problem. I had a scheduled C-Section with my second child in 2009 and we almost missed it because I was in the bathroom with diarrhea.

I had bouts of diarrhea all of my life. When I was really broke, like in college, I lived on pasta because it was cheap. I could get 4 meals out of a box of $0.75 pasta, chicken on sale, and $3 worth of zucchini. I thought I was getting skinny because I was eating so little, but these were also times when I was having lots and lots of gastrointestinal problems.

The idea that my husband couldn’t remember the last time he had diarrhea and the idea that I was spending a hour a day on the toilet didn’t set off any alarm bells at the time. I mean it just never occurred to me that having that much diarrhea was a problem. I think I thought it was normal.

Routine blood tests came back with a significant B12 deficiency. He said that I needed to start B12 shots and he was just the guy to do it. I said no way, run the celiac panel. He said you don’t have celiac. I said great, run the panel.

Why did the B12 deficiency set off an alarm? The year before my niece had been diagnosed with celiac. She was young at the time, like 4, and was on the verge of failure to thrive. The were lucky and found celiac. They did routine blood tests on her and found a significant B12 deficiency. Then they ran the celiac panel and was just a little positive. They did the endoscopy and found Marsh 4 level damage – completely flattened villi.

So, he ran the panel. I was not someone that ever thought of myself as sick. I was never someone that thought of myself that was unhealthy. I simply started feeling lousy and decided it was time to feel better. Considering on average it takes 10 years for people to be diagnosed with celiac disease, my diagnostic story is probably very different from everyone else’s. I didn’t feel like I was suffering or had a long battle trying to figure this out.

Looking back, my weight fluctuates significantly. I can gain weight and lose weight but I have no control over how and when it happens. I can eat the same foods year after year and my weight will do its own thing. I think my celiac waxes and wanes (note there is no scientific proof to this at all, this is just about me and my body) and my weight waxes and wanes with it. I haven’t seen my gastroenterologist for about 2 years. I felt like being in the clinical trial with blood tests every 6 weeks was sufficient, but it might be time for a repeat biopsy to see what is going on.

Also, I did not get a biopsy immediately. I had three positive tests. The diagnosing GP said that he had never seen anything like it. I waited. I waited until I was going to join a clinical trial because they needed endoscopy and blood test confirmation. So, I found a gastroenterologist.

We did an endoscopy in late December 2013. They didn’t find much damage, but only increased intraepithelial lymphocytes. So, this is almost a year on a gluten free diet, strongly positive blood tests, and indefinite biopsy results. However, there has never been a doubt about my celiac status. In blood tests from December 2013, my celiac blood panel was still positive – my TTG IGA was 7 and below 3 is positive and my DGP IGA was 30 when below 19 is positive. I have had a second opinion look at my celiac records and he said he was shocked I got diagnosed based on my December 2013 blood test and biopsy results. I then showed him the February 2013 results and he then said he understood and agreed with the diagnosis.

I’m writing all of this because today is very different than it was in 2013. I know a lot more, but so do doctors. They are more ready to look for celiac and it is more understood. The tests are better and are far more reliable than they once were.

I wanted to tell my story today. I wanted to let you all know that I don’t think of myself as a sick person or someone that needs to be catered to. I had the flu over the past few days and was really sick. I’m on the mend now, but it was hard. I got to the point where my brain said, I’m ready to take on the day. My body said, whoa their soldier. Most days my body will be on board with whatever I want to do. Only occasionally does it rebel and not allow me to accomplish what I want to. So I’ve gotten a little perspective on what it really means to be sick. For me, celiac is not one of those things that makes me think I’m really sick.

3 thoughts on “My Celiac Journey”